The Occult in Narnia, Part 6 - The Magician's Nephew Promotes the Occult 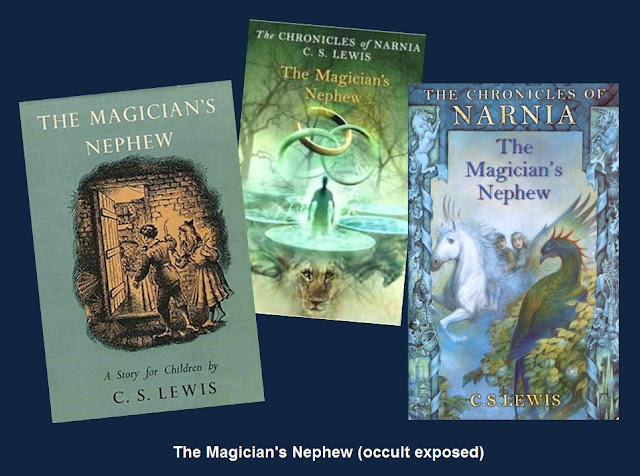 The Occult in Narnia, Part 6 - The Magician's Nephew Promotes the Occult

The story called The Magician's Nephew was set by C.S. Lewis to be the first book in The Chronicles of Narnia, even though he wrote it some years after The Lion, the Witch, and the Wardrobe. This story has a boy named Digory and a girl named Polly travelling to alternate universes by way of magic rings -- rings that his uncle Andrew obtained. Andrew Ketterley, a sorcerer (magician), offered a yellow, magic ring to Polly, Digory's neighbor girl. She vanished into thin air and arrived at another world, in an alternate universe. 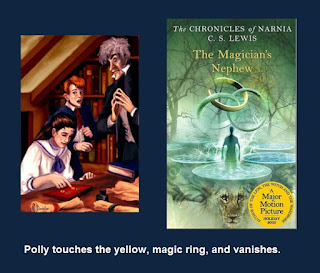 Seeing a greedy look flash on his uncle's face, Digory had warned Polly not to touch the yellow rings, which were in a tray. C.S. Lewis wrote:

It was too late. Exactly as he spoke, Polly's hand went out to touch one of the rings. And immediately, without a flash or a noise or a warning of any sort, there was no Polly. Digory and his Uncle were alone in the room." [1]

Let's stop here and address something that should be concerning to every parent. Magic rings that cause people to disappear are fictional. But, magic rings that can "control" an occult "force" are real.

The Force and Witchcraft 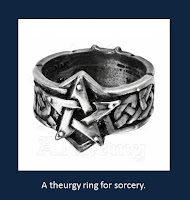 The late David J. Meyer, a former witch, who left witchcraft and became a born-again Christian, wrote some articles exposing the occult in some popular books and films. Meyer explained what magic rings were used for by real witches:

"The first thing a neophyte or beginner witch is taught is that there is a “force.” The “force” has two sides and can be controlled by magic spells, words, potions, incantations, rope magic, rings, amulets, and so on. Witches believe that there is good witchcraft and bad witchcraft, and the good always triumphs over evil! Witches also teach that battles are fought in the Middle Earth and in the astral plane causing upheavals both above and below. Thus, witches emphasize that good must triumph over evil, but it is all witchcraft." [2] (emphasis added) 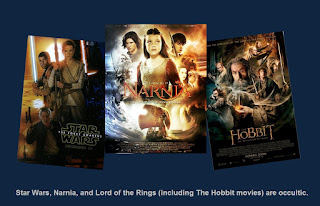 Witches control the "force" by way of many items, including rings. Many movies and books, including Star Wars and Lord of the Rings, are very occultic. Using a ring to work magic is what witches do today. This is not a fictional concept. It is reality. The Bible forbids magic and the occult in Deuteronomy 18 and elsewhere. 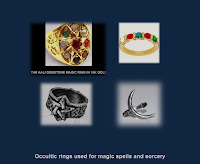 Moving on, we will now look at how young Digory treated his uncle after Polly magically vanished from touching a ring. Keep in mind that Narnia was written by a man who claimed to be a Christian. Digory confronts his uncle about sending Polly to an alternate universe. C.S. Lewis writes:

[Andrew said:] "...The whole point of sending anyone into the Other Place is that I want to find out what it's like."

"Well why didn't you go yourself then?"

"Digory had hardly ever seen anyone look so surprised and offended as his Uncle did at this simple question. "Me? Me?" he exclaimed. "The boy must be mad! A man at my time of life, and in my state of health, to risk the shock and the dangers of being flung suddenly into a different universe? ... Do you realise what you're saying? Think what Another World means—you might meet anything—anything."

"And I suppose you've sent Polly into it then," said Digory. His cheeks were flaming with anger now. "And all I can say," he added, "even if you are my Uncle—is that you've behaved like a coward, sending a girl to a place you're afraid to go to yourself." 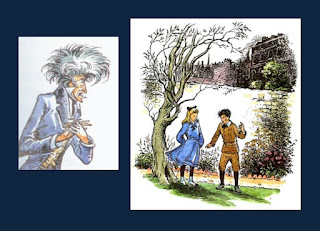 "Silence, Sir!" said Uncle Andrew, bringing his hand down on the table. "I will not be talked to like that by a little, dirty, schoolboy. You don't understand. I am the great scholar, the magician, the adept, who is doing the experiment. Of course I need subjects to do it on. ... No great wisdom can be reached without sacrifice. But the idea of my going myself is ridiculous. It's like asking a general to fight as a common soldier. Supposing I got killed, what would become of my life's work?"

Notice how Digory treats his uncle. Is this book teaching children to respect others, especially their elders? Besides having this boy character not showing respect to adults, and giving him a bad attitude toward his uncle, C.S. Lewis is doing something else with this character. Digory represents children that do not like the idea of magic. In the story, Digory actually didn't believe magic existed, until he saw it with his own eyes. After he saw Polly vanish, and after some heated dialogue with his uncle, Digory said: 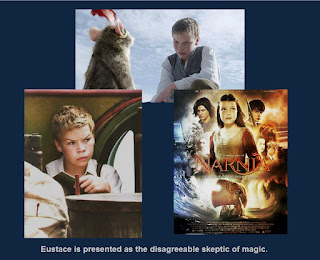 In The Lion, the Witch, and the Wardrobe, Digory is the professor that Lucy and her siblings are staying with. He has a magic wardrobe that sends Lucy and her friends to Narnia. He went from being a skeptical child to believer in magic.

In The Voyage of the Dawn Treader, Eustace Clarence was presented to the reader as unlikable and stuck-up. He scoffed at the idea of magic being real. After his magical adventures in Narnia, Eustace was said to have "improved." C.S. Lewis writes: "...back in our own world everyone soon started saying how Eustace had improved, and how "You'd never know him for the same boy..."

Lewis makes the boy characters that are skeptical or uninterested in magic look unhappy and unlikable. Children that don't believe in magic are being slowly shaped by the Narnia books to believe that magic is actually real, or something that could be real. An appetite for a magical realm is what draws children into more and more overtly occultic fantasy. 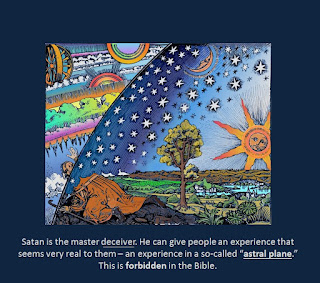 In witchcraft, the 'astral plane' is a hypothetical realm where spirits live and where other worlds are thought to exist. There are many views about what exists in this occultic concept of the supernatural world. Some believe there are planets populated by 'astral' beings. People that practice witchcraft and eastern meditation have said they travel to such worlds frequently. This practice is forbidden in the Bible, in Deuteronomy 18.

It is a type of divination. Merriam-Webster defines divination as: "the art or practice that seeks to foresee or foretell future events or discover hidden knowledge usually by the interpretation of omens or by the aid of supernatural powers" [4]. Discovering "hidden knowledge" happens as a sorcerer supposedly 'travels on the astral plane.' When Lucy goes to Narnia, or Digory and Polly travel to the land of Charn, children are being taught that astral travel is 'good.' For, indeed, what they are really doing is astral travel.

Deuteronomy 18:10-11 says: "[10] There shall not be found among you any one that maketh his son or his daughter to pass through the fire, or that useth divination, or an observer of times, or an enchanter, or a witch, [11] Or a charmer, or a consulter with familiar spirits, or a wizard, or a necromancer." 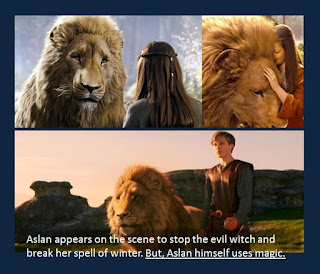 Aslan, the lion, who Lewis called a "supposal" of Christ [3], is also reinforcing in children's minds that magic is "neutral," and can be used for either "good" or "bad." C.S. Lewis writes:

"Son of Adam," said Aslan, "you have sown well. ... The Witch of whom I told you has fled far away into the North of the world; she will live on there, growing stronger in dark Magic. ..." (emphasis added) [1]

As we looked at earlier, David J. Meyer (a Christian, who left witchcraft) wrote: "Witches believe that there is good witchcraft and bad witchcraft, and the good always triumphs over evil!" [2]

If you are a parent, you should pay attention to what your children are watching, listening to, and reading. Children are learning about their world from what they see, listen to, and read. Their minds are being shaped by the ideas being presented to them through books, novels, TV shows, and other people.

The Bible is very clear about what God thinks of witchcraft, magic, sorcery, and anything like it.

[12] For all that do these things are an abomination unto the LORD: and because of these abominations the LORD thy God doth drive them out from before thee."

[2] Meyer, David J. "A Former Witch Looks at The Lord of the Rings." lasttrumpetministries.org