Harry Potter - Is It Pretend, or Is It Real Witchcraft? Harry Potter - Is It Pretend, or Is It Real Witchcraft?

Harry Potter began in 1997 and became a global phenomenon. It spawned eight Hollywood films, many toys, and a greater interest in kids for the occult (esoteric or “hidden knowledge”). But, we ask: ‘Is it pretend magic, or is it real witchcraft that J.K. Rowling is teaching through her books?’

We’ll start with the pointy, wizard hats that can be found throughout Harry Potter, Lord of the Rings, and other fantasy stories.

The Pointy Hat or the Wizard Hat 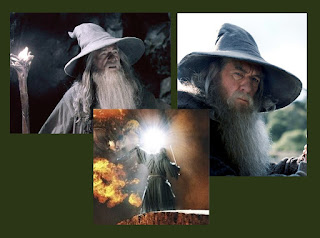 Witches have been associated with pointy hats for a few hundred years. The origin of the pointy, wizard hat, some archeologists and historians now believe, comes from pointy, gold objects from the Bronze Age. These metal objects were fashioned with astrological symbols and were believed, by some historians, to be worn by people known as “king-priests.” They were thought to be both a type of wizard and a political leader. And, their hats were believed to help them predict the movement of the sun and stars. [A.]

In Harry Potter books and films, the students at Hogwarts school of witchcraft and wizardry occasionally wear pointy hats. But, some of the teachers wear them often. One such person is Minerva McGonagall. 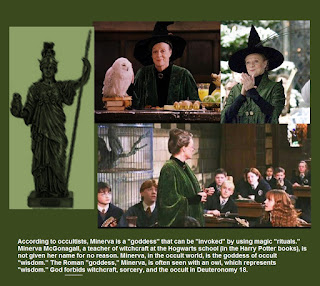 In the Harry Potter books, Professor Minerva McGonagall, a witch, has the “ability” to shapeshift into a cat. Often seen with a pointy, black hat, Minerva teaches the students at Hogwarts about witchcraft and spell casting. Her name comes from a Roman goddess of wisdom, war, the arts, and handicrafts. But, the occult world values Minerva as the goddess of wisdom (occult wisdom).

Using Google, I found a place where an occultist teaches that Minerva is a “goddess” that can be “invoked in … rituals.” This person writes:

“Minerva, whose creature is the owl, can be invoked in employment rituals and for the development of skills...musical ability… for ... justice. Unlike Bellona … both Athena and Minerva are used in rituals for using … persuasion, … to overcome injustice.”  [End quote] 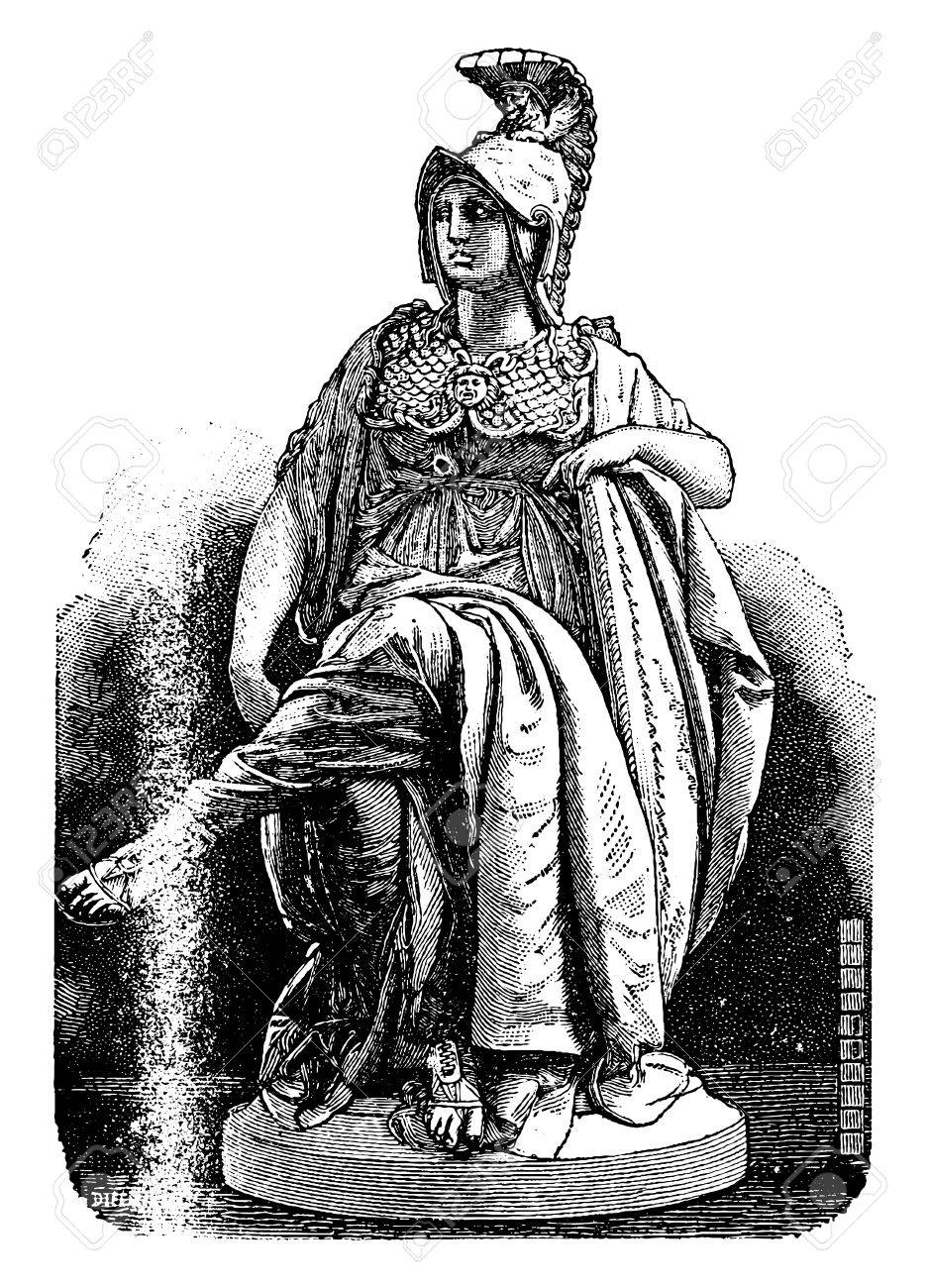 This Minerva character in Harry Potter is not an innocent lady. She is teaching children that witchcraft can be used for “good.” In “white” witchcraft, witches (or Wiccans) call upon the goddess Minerva to aid them. This is something forbidden in the Bible. It is consulting with a familiar spirit and idolatry.

Wiccans (witches) call upon gods and goddesses for spiritual assistance. But, the Bible says:

Witches also believe that magic wands can be charged with magical powers to be released at the witch’s will. 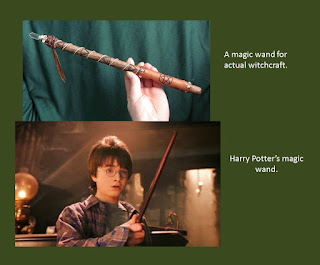 A witchcraft website described the purposes of a magic wand:

“The wand was and is used for healing as well as spells and magic, it can be used to charge a plant or herb with special powers of healing, .... The wand is used by the witch pointing the wand and directing the energy, often using silent word spells to empower the wand.

The wand is a traditional choice for witches, and as witches neither borrow or lend their precious wand, it is charged with the individual witch’s energy as though it is an extension of themselves. …. Energy can be sent over long distances ..., the energy in the wand is extremely powerful, and the space where the witch conjures magic is sacrosanct.” [End quote]

Magic wands are actually used by witches and wizards today, like they were used thousands of years ago. Deuteronomy 18:10 also says (in part): “[10] There shall not be found among you  … or an enchanter, or a witch,”

Malachi 3:5 says (in part): “[5] And I will come near to you to judgment; and I will be a swift witness against the sorcerers, and … saith the LORD of hosts.” 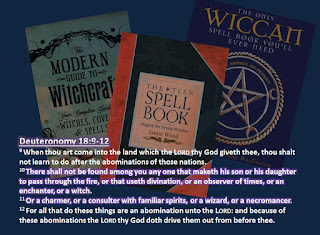 Another item of witchcraft is a grimoire, or a magic book of incantations, spells, and occult teachings. Harry Potter and his classmates use them as textbooks. Occult bookstores and online stores sell grimoires (spellbooks). These contain invocations for summoning supernatural powers or spirits to aid the sorcerer. They contain instructions to the witch (or wizard) and, of course, include spells for various purposes. There is nothing fictional or pretend about grimoires (or spellbooks). Actual witches use them for working their sorcery (or “magick,” spelled with a “k”).

God forbids charms, talismans, magic rings, wands, spells, or any kind of magic or sorcery. In Acts 19, new believers in Jesus that had magic books from when they were into the occult, burned them, regardless of how expensive they were.

“[19] Many of them also which used curious arts brought their books together, and burned them before all men: and they counted the price of them, and found it fifty thousand pieces of silver.”

Getting to Know God as Our Best Friend Is the Answer to All of Life's Problems.