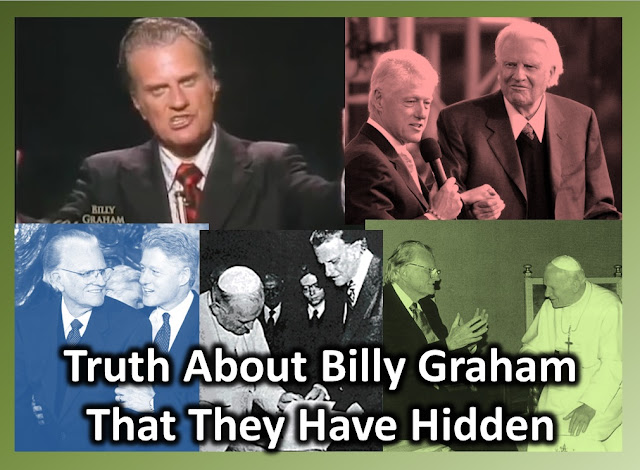 Is "Not" the Only Way

The famous "evangelist" Billy Graham passed away recently. His dangerous doctrine is still spreading through the Church and doing harm to the body of Christ. The ecumenical movement is still promoting a merger of Protestants with Roman Catholicism. And, false teachers are still promoting the idea that people around the world can be saved by their own good works, without trusting in Jesus Christ alone for salvation. This false doctrine was taught by the late Billy Graham.

Billy Graham was interviewed by Robert Schuller on his Hour of Power TV show. The interview was broadcast on May 31, 1997. It exposed something about the famous "evangelist" that should be very disturbing.

[Billy Graham said:] "[...] whether they come from the Muslim world, or the Buddhist world, or the Christian world or the non-believing world, they are members of the Body of Christ because they've been called by God. They may not even know the name of Jesus but they know in their hearts that they need something that they don't have, and they turn to the only light that they have, and I think that they are saved, and that they're going to be with us in heaven."("Billy Graham Believes...").

[Robert Schuller said:] "What, what I hear you saying that it's possible for Jesus Christ to come into human hearts and soul and life, even if they've been born in darkness and have never had exposure to the Bible. Is that a correct interpretation of what you're saying?" ("Billy Graham Believes...").

[Billy Graham said:] "Yes, it is, because I believe that. I've met people in various parts of the world in tribal situations, that they have never seen a Bible or heard about a Bible, and never heard of Jesus, but they've believed in their hearts that there was a God, and they've tried to live a life that was quite apart from the surrounding community in which they lived." ("Billy Graham Believes..."). [End quote]

Where does Billy Graham get this false teaching from? The Bible certainly does not teach that people of other religions can be saved apart from making Jesus Christ their personal Savior and Lord. Rather, God’s Word says:

Isaiah 64:6 says: "But we are all as an unclean thing, and all our righteousnesses are as filthy rags; and we all do fade as a leaf; and our iniquities, like the wind, have taken us away."

1 Timothy 2:5 says: “For there is one God, and one mediator between God and men, the man Christ Jesus;”

Acts 4:12 says: “Neither is there salvation in any other: for there is none other name under heaven given among men, whereby we must be saved.”

Romans 10:9-10 says: “[9] That if thou shalt confess with thy mouth the Lord Jesus, and shalt believe in thine heart that God hath raised him from the dead, thou shalt be saved. [10] For with the heart man believeth unto righteousness; and with the mouth confession is made unto salvation.”

There are many testimonies of former Muslims forsaking Islam and turning to Jesus Christ for alone salvation and trusting only in Jesus Christ's blood to wash away their sins. Many saw Jesus in dreams and visions, even though they knew very little about Him. In the visions and dreams, Jesus would point the Muslims to the Bible and would direct them to true followers of Jesus.

Following his heresy of believing that lost souls are saved by their works (instead of by believing only on the name of Jesus Christ), Billy Graham also believed that Catholics (who trust in their own works for salvation) are truly saved.

Billy Graham was quoted in a newspaper as saying:

"Many of the people who reach a decision for Christ at our meetings have joined the Catholic Church and we have received commendations from Catholic publications for the revived interest in their Church following our campaigns. This happened both in Boston and Washington. After all, one of our prime purposes is to help the churches in a community. If after we move on, the local (sic) churches do not feel the efforts of these meetings in increased membership and attendance, then our crusade would have to be considered a failure." (Pittsburgh).

Billy Graham also said: “I’ve found that my beliefs are essentially the same as those of orthodox Roman Catholics.” (McCall’s, January 1978).

In 1989, an "ecumenical" adviser to Catholics said that Catholic people who came forward to receive counseling during a Billy Graham crusade would be directed to Roman Catholic counselors in their home area. Apparently, there was no attempt to point them to biblically-sound teaching.

"The idea behind this is that those who come forward for counselling during a Mission evening in June, if they are Roman Catholic, will be directed to a Roman Catholic 'nurture-group’ under Roman Catholic counselors in their home area. If certain people present themselves for counselling at a Mission and have no church roots at all then they are asked 'which church brought you’ and asked to contact that church..." (John Ashbrook, New Neutralism II, Mentor, Ohio: Here I Stand Books, 1992, p. 35).

While Billy Graham has said that Jesus Christ brings salvation to people, he is also believed that Protestants and Catholics were of the same faith. And, as we saw earlier, Graham said that Muslims and Buddhists are saved if they live a good life and try their best to do what was right.

Roman Catholics, Muslims, Buddhists, and all religions of the world (other than true followers of Christ) believe that salvation is by works. They do not believe that only Jesus Christ's precious blood (shed at the cross about 2,000 years ago) is sufficient to save a person from his or her sins and is able to make that person justified (or just-as-if-they-never-sinned).

What Catholics Believe about Salvation

Roman Catholic doctrine about the Eucharist is adamant that: "The Eucharist is necessary for salvation, to be received either sacramentally or in desire." (The Question and Answer Catholic Catechism, Q. 1217.) (Bold added)

Catholic doctrine also falsely states that Mary and Jesus intercede for us.

"She [Mary] is also mediatrix because she continues to intercede for us who are still working out our salvation on earth or suffering in purgatory." (The Question and Answer Catholic Catechism, p. 244, Q. 253.)

Nowhere in scripture is Mary taught to be a mediatrix (or female intercessor between God and man). 1 Timothy 2:5-6 reveals this truth:

"[5.] For there is one God, and one mediator between God and men, the man Christ Jesus;

6. Who gave himself a ransom for all, to be testified in due time."

Again, Acts 4:12 says: “Neither is there salvation in any other: for there is none other name under heaven given among men, whereby we must be saved.”

And, Isaiah 64:6 says: "But we are all as an unclean thing, and all our righteousnesses are as filthy rags; and we all do fade as a leaf; and our iniquities, like the wind, have taken us away."

[Read Romans chapter 4 for more about salvation by faith without works.]

For Billy Graham to say that all religious people are saved by doing good works, without knowing Jesus Christ as their personal Savior and Lord, is poisoning the Gospel. Teaching that Catholics are fellow Christians is a deception to bring Protestants back to Roman Catholicism or to a very poisonous form of Christianity.

➠ If you would like to know Abba God the Father and Jesus Christ (God the Son), and be saved from sin, click here to read more.

Other references cited are found in the article itself.