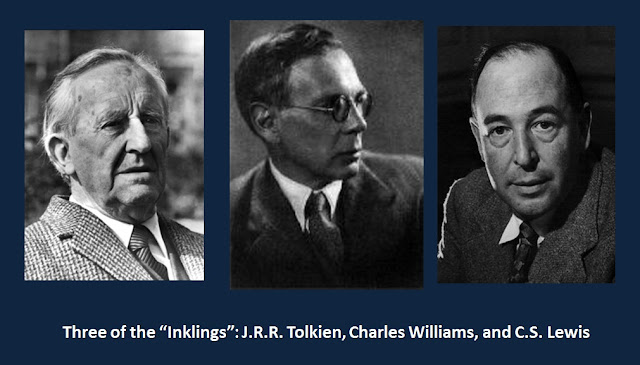 Lord of the Rings Exposed - The Inklings and the Occult (J.R.R. Tolkien, C.S. Lewis, and Charles Williams)

Now posthumously famous around the world, J.R.R. Tolkien and C.S. Lewis have had a huge impact on our modern culture. Many video games, fantasy novels, and role-playing games (including Dungeons and Dragons) have been strongly influenced by The Lord of the Rings [A]. Gary Gygax, the maker of Dungeons and Dragons, originally incorporated story elements from Lord of the Rings before changing these when the game was sold to the public [A]. Tolkien, Lewis, and other Oxford professors and writers, together, formed a small group known as the "Inklings." They would meet together to discuss literature and read aloud their fiction manuscripts. We will now look at one "Inkling" in particular.

A man you may not have heard of befriended J.R.R. Tolkien and C.S. Lewis, and played an important a role in influencing their writing. His name was Charles Williams, an esoteric author of novels, poems, and nonfiction works. What makes him an interesting character is his fascination with the occult. At the age of about 30, Williams joined a secret society that focused on occult rituals, ‘magick,’ and gnostic teachings.

Humphrey Carpenter wrote about Williams’s initiation (in 1917) into an esoteric, secret society called the Hermetic Order of the Golden Dawn [B]. From Carpenter’s book, The Inklings: C. S. Lewis, J. R. R. Tolkien and Their Friends, we read:

"Among its first initiates was a coroner who allegedly performed necromantic rites... while another early member was black magician Aleister Crowley, the self styled Great Beast.... But the Order of the Golden Dawn also included persons of less outlandish ways, such as W. B. Yeats, … A. E. Waite ....  It was this group that Williams joined.” [B.] [End quote] 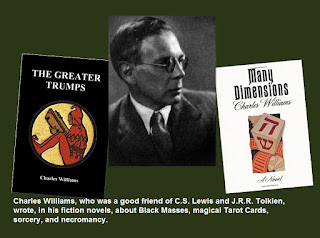 The occult and esoteric teachings that Williams studied and absorbed influenced his novels that he wrote years later. It is these novels that we will look at briefly to show you how occultic they were. One example is The Greater Trumps. Wikipedia gives a brief summary of this dark book: “The original Tarot deck is used to unlock enormous metaphysical powers by allowing the possessors to see across space and time, create matter, and raise powerful natural storms.” [C.]

In his book The Narnian, Alan Jacobs wrote about Charles William’s fascination for the occult and how occult themes were found in Williams’s novels:

“…but Williams was chiefly known for his novels.... Often referred to as 'supernatural thrillers,' they include... Black Masses, magical Tarot Cards, the crown of King Solomon, an Antichrist, and dead people who can speak with the living.”  [B.] [Note: Speaking with spirits that claim to be of the dead is necromancy, found in witchcraft.] 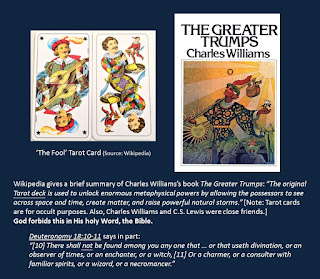 Humphrey Carpenter wrote in his book:

“Whatever the sources, by the late nineteen-twenties Williams was thoroughly acquainted with the terminology and practices of black magic.... To him it was as valid a form of symbolism as the symbols of Christianity....” [B.] [End quote] (emphasis added) [Note: Both “black” and “white” magic are forms of witchcraft and sorcery.]

God forbids the occult and witchcraft in Deuteronomy 18 and elsewhere.

“[10] There shall not be found among you any one that maketh his son or his daughter to pass through the fire, or that useth divination, or an observer of times, or an enchanter, or a witch, [11] Or a charmer, or a consulter with familiar spirits, or a wizard, or a necromancer.”

Knowing that Charles Williams was drawn into the occult, and knowing that he was friends with both C.S. Lewis and J.R.R. Tolkien, what does that tell us about Tolkien and Lewis? First of all, we must ask: ‘How close were these men?’

How Close Were Charles Williams, C.S. Lewis, and J.R.R. Tolkien?

"...Williams, … a former member of the Fellowship of the Rosy Cross [i.e. Rosicrucianism] and a specialist in Tarot and Kabbala, was a close friend of Tolkien during the years of the Second World War, and an even closer friend - almost, indeed, a spiritual adviser - to C. S. Lewis....” [B.] [End quote] (underlining added)

Williams was a close friend to Tolkien, and was even closer to Lewis. Alan Jacobs (author of The Narnian) writes of C.S. Lewis’s close friendship with Charles Williams:

‘In a letter to Sister Penelope--the one in which he refers to Williams as "my dearest friend"--he [Lewis] writes that Williams's death [Here Lewis is quoted saying:] has greatly increased my faith. ... I have often heard of ... bereaved mothers who "felt that 'he' was now nearer to them than while in the body" and always thought it a sentimental hyperbole. I know better now.’ [D.] [End quote]

C.S. Lewis and His Fascination with the Occult 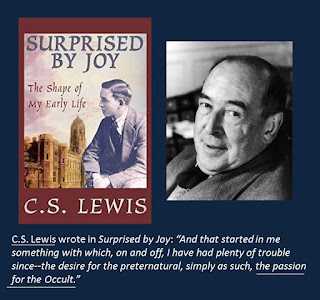 How close were Lewis and Tolkien to occultist Charles Williams? They were very close. They all were very fond of occult literature and concepts. C.S. Lewis even admitted in his book Surprised by Joy that he had a craving for the occult. In this book, Lewis wrote of how, during his time in a boarding school, a teacher (Miss. C.) taught on occult subjects of “Theosophy, Rosicrucianism, Spiritualism; the whole Anglo-American Occultist tradition.” [E.]. Lewis was captivated because including the occult into “Christianity” made sense to him.

C.S. Lewis wrote: “And that started in me something with which, on and off, I have had plenty of trouble since--the desire for the preternatural, simply as such, the passion for the Occult.” [E.]

Decades after his school experience, and some years after his supposed "conversion" to Christianity, while C.S. Lewis was visiting Greece, he felt a strong desire to worship the Greek god Apollo. Lewis wrote:

"I had some ado to prevent Joy and myself from relapsing into Paganism in Attica! At Daphni it was hard not to pray to Apollo the Healer. But somehow one didn’t feel it would have been very wrong — would have only been addressing Christ sub specie Apollonius. We witnessed a beautiful Christian village ceremony in Rhodes and hardly felt a discrepancy." [G.] [End quote] (bold added)

C.S. Lewis admitted he loved paganism, and he even thought that Apollo, the Greek sun god, was a type of Christ. That is heresy. Jesus Christ came to the earth as a man, died (to his human body), and rose from the dead (in a resurrected body). Apollo did none of those things. Apollo, known for light; occult ‘medicine;’ and so-called ‘prophecy,’ is another name for Lucifer, who high-level Freemasons say “bears the light”.

Albert Pike, a 33rd degree Freemason, wrote in his book Morals and Dogma:

“Lucifer, the Light-Bearer! Strange and mysterious name to give to the Spirit of Darkness! … Is it he who bears the light, and with its splendors intolerable blinds feeble, sensual or selfish Souls? Doubt it not!” [H.]. [End quote]

The Bible warns us of Satan’s disguises in 2 Corinthians 11.

13 For such are false apostles, deceitful workers, transforming themselves into the apostles of Christ.

14 And no marvel; for Satan himself is transformed into an angel of light.

15 Therefore it is no great thing if his ministers also be transformed as the ministers of righteousness; whose end shall be according to their works.

Since Satan can appear as an angel of light, then it is certain his servants can too. Many of these servants of Satan do not know that they serve the devil. But, their fruits (actions and words) show what kind of tree they are. Jesus Christ said in Matthew 7:

21 Not every one that saith unto me, Lord, Lord, shall enter into the kingdom of heaven; but he that doeth the will of my Father which is in heaven.”

Getting to Know God as Our Best Friend

Is What True Christianity Is All About.

God calls us Christians to come out of the world, and be separate from its ungodly ways (2 Corinthians 6:14-18). 2 Corinthians 6:17-18 — "[17] Wherefore come out from among them, and be ye separate, saith the Lord, and touch not the unclean thing; and I will receive you, [18] And will be a Father unto you, and ye shall be my sons and daughters, saith the Lord Almighty."

Getting to know God as our best Friend is the answer to all of life's problems, and is what living is truly all about. Jesus said in John 17:3: "And this is life eternal, that they might know thee the only true God, and Jesus Christ, whom thou hast sent."

[11] Thou wilt shew me the path of life: in thy presence is fulness of joy; at thy right hand there are pleasures for evermore.

[7] How excellent is thy lovingkindness, O God! therefore the children of men put their trust under the shadow of thy wings.

[8] They shall be abundantly satisfied with the fatness of thy house; and thou shalt make them drink of the river of thy pleasures.

[B.] "The INKLINGS - Charles Williams." crossroad.to.