The All-Seeing Eye and other masonic / occult symbols appear in many movies, TV shows, cartoons, ads, music videos, and video games. Here are some examples.

False Christian religions (such as Catholicism, Mormonism, and the Watchtower Society) also have occult / masonic symbols.

THE ALL-SEEING EYE AND ITS DECEPTION
(Excerpted from "The Deception and Lies of the Antichrist")
Few people understand that there is an agenda behind Hollywood movies and TV shows. They are not just meant to entertain. If you look at any Hollywood movie poster, trailer, etc. –and you know what to look for—you may be able to see masonic and occult symbolism. The infamous all-seeing eye can be found hidden in plain sight in many movies, TV shows, video games, and music videos.
It is the eye that the Freemasons chose to put on the back of the dollar bill. Many Catholic churches (which all have profoundly unbiblical teachings) display the all-seeing eye copiously throughout their masonry, woodwork, stain glass windows, paintings, etc. 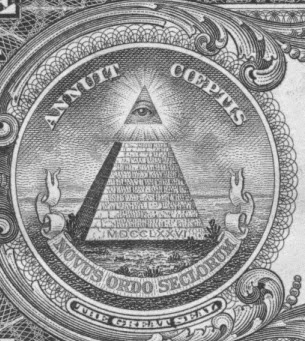 The book Magical Symbols by Frederick Goodman defines the All-Seeing Eye as:

"The eye plays a most important part in occult symbolism and probably owes its origin in western magical designs to the Eye of Horus, which was one of the most frequently used of Egyptian magical symbols.” (Fredrick Goodman, Magical Symbols p. 101, 1989) (Emphasis Added)

This Eye of Horus or the eye of “illumination” is the eye of the god of Freemasonry. Albert Pike, a 33rd degree Freemason who had great influence on Freemasonry, wrote this about the masonic god: "The Masonic religion should be, by all of us initiates of the high degrees, maintained in the purity of the Luciferian doctrine. . . . Yes, Lucifer is God, and unfortunately Adonay  [God the Creator] is also God." [Albert Pike (quoted by A.C. De La Rive in La Femme et l'enfant dans la Franc-Maconnerie Universelle, p. 588; Lady Queenborough, Occult Theocracy pp. 220-221.) ]

You have it from Albert Pike; high-ranking masons believe Lucifer (Satan) is “God.” Pike believed the lie that Satan is equal to God, the Creator. This Luciferian lie contradicts the Bible sharply.

10 Ye are my witnesses, saith the Lord, and my servant whom I have chosen: that ye may know and believe me, and understand that I am he: before me there was no God formed, neither shall there be after me.

6 Thus saith the Lord the King of Israel, and his redeemer the Lord of hosts; I am the first, and I am the last; and beside me there is no God.

5 I am the Lord, and there is none else, there is no God beside me: I girded thee, though thou hast not known me:

44 Ye are of your father the devil, and the lusts of your father ye will do. He was a murderer from the beginning, and abode not in the truth, because there is no truth in him. When he speaketh a lie, he speaketh of his own: for he is a liar, and the father of it.

The great liar, Satan, has his eye in as many places as he can get away with it. As one example, the movie National Treasure, which starred Nicolas Cage, prominently displayed the “All-Seeing Eye” on the movie posters. Other movies are more subtle and place the eye in the background or show it briefly. Hollywood movies, TV shows, music videos, Rock artists, etc. feature occult symbolism very frequently. The purpose is to indoctrinate people into accepting the New World Order.

(Read more here: The Deception and Lies of the Antichrist.)

To learn more about the occult in the Watchtower Society, click here.

To learn about how Catholicism contradicts the Bible, click here.