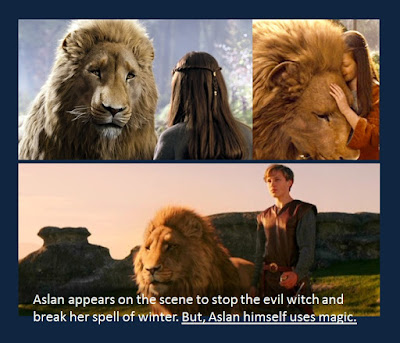 In this short series, we will show facts about C.S. Lewis and his books that will challenge the belief many hold that ‘C.S. Lewis was a Christian author of good children’s stories and Christian books.’ Today, we will look at some of the occultic themes found in The Chronicles of Narnia. We will ask and answer the question: 'Is real witchcraft portrayed in C.S. Lewis' Narnia series?'

In pre-medieval times, Europe was primarily made up of pagan tribes, such as the Celts, Goths, Picts, and others. These tribes often worshiped gods and goddesses, such as Thor, Oden, and Aine (a Celtic fertility goddess). People in ancient Europe often claimed to have seen supernatural beings appear in wooded areas and elsewhere.

The Peterborough Chronicle is a historical account of England written during the Middle Ages, after the Norman Conquest of 1066. A supernatural event was reported to have been witnessed near the town of Peterborough. Through the woodland surrounding the town of Peterborough, large, hideous black creatures appeared, blowing horns, and many were riding black horses and he-goats. Read the actual account below:

"Many men both saw and heard a great number of huntsmen hunting. The huntsmen were black, huge, and hideous, and rode on black horses and on black he-goats, and their hounds were jet black, with eyes like saucers, and horrible. This was seen in the very deer park of the town of Peterborough, and in all the woods that stretch from that same town to Stamford, and in the night the monks heard them sounding and winding their horns." [1]

This account is one of many similar accounts of supernatural creatures making their appearance in what are called "wild hunts." As these events became more commonly known in Germanic lands, Scandinavia, Britain, and elsewhere, people included fairies in their retelling of the stories.

Jacques Vallee Reveals the True Nature of Aliens and Fairies 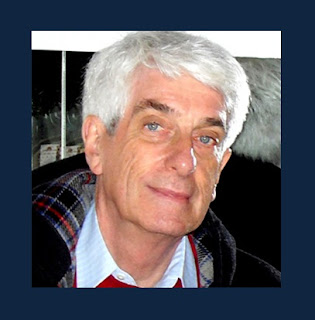 Jacques Vallee, a well known UFO researcher, wrote in his book Passport to Magonia that from ancient times people have described encounters with fairies that seemed to have intercourse with human beings. Vallee compares demons with fairies in the same book:

"What we have here is a complete theory of contact between our race and another race, non-human, different in physical nature, but biologically compatible with us. Angels, demons, fairies, creatures from heaven, hell, or Magonia: they inspire our strangest dreams, shape our destinies, steal our desires......

The Bible reveals how a third of God's angels rebelled against Him, and became fallen angels that served Satan, who had been known as the angel Lucifer. Revelation 12 speaks of a great red dragon (Satan) who drew a third of the stars of heaven.

[3] And there appeared another wonder in heaven; and behold a great red dragon, having seven heads and ten horns, and seven crowns upon his heads. [4 a.] And his tail drew the third part of the stars of heaven, and did cast them to the earth: ..."

Isaiah 14:12 speaks how Lucifer (Satan) is fallen from Heaven. The prophecy says: "How art thou fallen from heaven, O Lucifer, son of the morning! how art thou cut down to the ground, which didst weaken the nations!" In Luke 10:18, Jesus said that He saw Satan fall from heaven. Luke 10:18 — "And he said unto them, I beheld Satan as lightning fall from heaven." Revelation 12 goes on to say how Satan was cast out of heaven with his angels.

Revelation 12:9 — "And the great dragon was cast out, that old serpent, called the Devil, and Satan, which deceiveth the whole world: he was cast out into the earth, and his angels were cast out with him."

These same evil spirits go forth seeking whom they may devour.

[8] Be sober, be vigilant; because your adversary the devil, as a roaring lion, walketh about, seeking whom he may devour: [9] Whom resist stedfast in the faith, knowing that the same afflictions are accomplished in your brethren that are in the world.

These evil spirits can appear as angels of light to deceive men. 2 Corinthians 11:14 — "And no marvel; for Satan himself is transformed into an angel of light." They are deceivers and liars that make themselves appear like what they are not. If demons can appear as angels of light, why can't they appear as fairies, elves, leprechauns, dwarfs, trolls, monsters, dryads, nymphs, aliens, etc.? 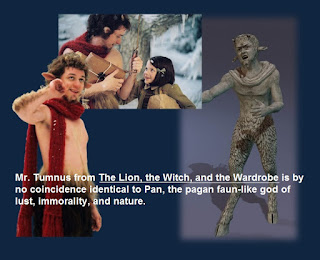 In The Chronicles of Narnia, many of these magical creatures are seen, including satyrs or fauns, such as Mr. Tumnus, who helped Lucy in The Lion, the Witch, and the Wardrobe. One of the most well known fauns is the pagan god Pan. Like Pan, Mr. Tumnus appears as a half man, half goat creature. Pan is known for being a symbol of lust, immorality, and paganism. Disturbingly, Mr. Tumnus (the Pan look-alike) brings a little girl to his cottage. He offers her tea and plays music that enchants Lucy. Here's what C.S. Lewis wrote (in The Lion, the Witch, and the Wardrobe):

"Then to cheer himself up he [Mr. Tumnus] took out from its case on the dresser a strange little flute that looked as if it were made of straw and began to play.

and go to sleep all at the same time. It must have been hours later when she shook herself..." [3]

In the 2005 movie adaptation, this magic flute causes magical figures to appear, dancing in the flickering fireplace flames of the cottage. IMDB said of the faun's music: "He plays a hypnotic tune on a flute-like instrument, and Lucy actually sees shapes form in the flames of Tumnus' hearth fire, shapes of a man riding a unicorn, and fauns and dryads dancing." [4].

The magic flute is just the starting point for more occultic elements that Lewis will put in his Narnia books. The very fact that a children's story is portraying an "evil" witch who has the power to put spells on an entire country to cause a perpetual winter is disturbing, knowing that real witches do exist today. Making a witch seem powerful and able to cause perpetual winter is not biblical because the devil does not have the power to do such a thing. The devil is the one behind all witchcraft. Satanists use a type of sorcery that knowingly requires the use of demons. The devil does not have the power to cause eternal winter or summer. But, in the Narnia world, this evil witch can cause everyone to suffer from the cold of winter.

Aslan, the lion character, appears on the scene to stop the evil witch and break her spell of winter. But, Aslan himself uses magic. The very way Lucy and her siblings arrived in Narnia was due to magic. But, in The Voyage of the Dawn Treader, a magic spell-book is used.

The Magic Spell-Book in The Voyage of the Dawn Treader 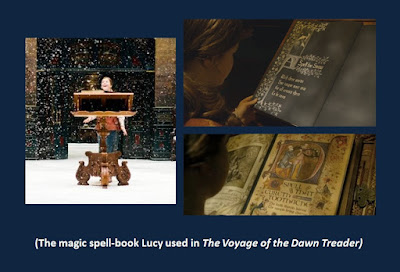 C.S. Lewis has young Lucy casting a spell from a magic spell-book, in a children's novel. The spell turns some invisible creatures visible. Earlier, they had been hexed by a wizard for their disobedience to him. He had cast a spell or hex that caused them to look very ugly. One of the creatures' children had read a spell from the spell-book to make them invisible.

When Lucy opened the spell-book, she found it fascinating. C.S. Lewis writes:

"She went up to the desk and laid her hand on the book; her fingers tingled when she touched it as if it were full of electricity. She tried to open it but couldn't at first; this, however, was only because it was fastened by two leaden clasps, and when she had undone these it opened easily enough. And what a book it was!

It was written, not printed; written in a clear, even hand, with thick downstrokes and thin upstrokes, very large, easier than print, and so beautiful that Lucy stared at it for a whole minute and forgot about reading it. The paper was crisp and smooth and a nice smell came from it; and in the margins, and round the big coloured capital letters at the beginning of each spell, there were pictures." [5] [underlining added]

Notice how C.S. Lewis describes this magic spell-book that the main character beholds with fascination? Children reading this novel are being told that magic spells and magic spell-books are "beautiful." Parents should be concerned what their children are being taught by Narnia, Lord of the Rings, Star Wars, and other fantasy stories. The magic in these stories and in the Narnia books is not just fictional.

Real witches use magic for many purposes. Spell-casting is practiced by witches today and magic spell books can be found in occult bookstores. Bob Johnson, a practitioner in the occult, wrote:

“The tools of magick are spells, talismans (charms and objects), potions, rituals, and ceremonies. They are all used to achieve a desired result. For example, witchcraft has spells for obtaining money.... Witchcraft spells can get you that raise...” [6]

What does the Bible say about witchcraft and magic? Deuteronomy 18 is very clear ...

[9] When thou art come into the land which the LORD thy God giveth thee, thou shalt not learn to do after the abominations of those nations. [10] There shall not be found among you any one that maketh his son or his daughter to pass through the fire, or that useth divination, or an observer of times, or an enchanter, or a witch, [11] Or a charmer, or a consulter with familiar spirits, or a wizard, or a necromancer.

[12] For all that do these things are an abomination unto the LORD: and because of these abominations the LORD thy God doth drive them out from before thee. [13] Thou shalt be perfect with the LORD thy God. [14] For these nations, which thou shalt possess, hearkened unto observers of times, and unto diviners: but as for thee, the LORD thy God hath not suffered thee so to do.

The Bible forbids witchcraft, sorcery, magic, and anything having to do with the themes that many movies, books, and TV shows promote. If you are a Christian, I encourage you to seek God about what you should do for your children. Children need to have care, compassion, and love. They need their deep spiritual needs met. But, only God can meet their needs (and our needs).

Jeremiah 31:3 says: "The LORD hath appeared of old unto me, saying, Yea, I have loved thee with an everlasting love: therefore with lovingkindness have I drawn thee."

[5] This then is the message which we have heard of him, and declare unto you, that God is light, and in him is no darkness at all. [6] If we say that we have fellowship with him, and walk in darkness, we lie, and do not the truth: [7] But if we walk in the light, as he is in the light, we have fellowship one with another, and the blood of Jesus Christ his Son cleanseth us from all sin.

If you are coming here as a non-Christian, I encourage you to read this (click here).  God desires to have fellowship with you, as you make Jesus Christ your Lord and Savior.

[3] Lewis, C.S. "THE LION, THE WITCH AND THE WARDROBE." archive.org. (Full text) <https://archive.org/stream/TheChroniclesOfNarnia/The%20Chronicles%20of%20Narnia_djvu.txt>

[4] "The Chronicles of Narnia: The Lion, the Witch and the Wardrobe [synopsis]." imdb.com.