Is necromancy (a type of divination) in The Return of the King?

In The Return of the King novel, Aragorn finds a route that goes through territory held by those Tolkien calls “the Dead.” They are supposedly spirit beings of people who died. And, Aragorn is faced with confronting them.

Gimli (a dwarf) recounts what happened when Aragorn spoke to “the Dead.” Tolkien writes:

“'But Aragorn halted and cried with a great voice: "Now come! By the Black Stone I call you! "And suddenly the Shadow Host that had hung back at the last came up like a grey tide, sweeping all away before it. Faint cries I heard, and dim horns blowing, ... it was like the echo of some forgotten battle .... Pale swords were drawn; but I know not whether their blades would still bite, for the Dead needed no longer any weapon but fear. ...” [A.] [End quote](underline added) 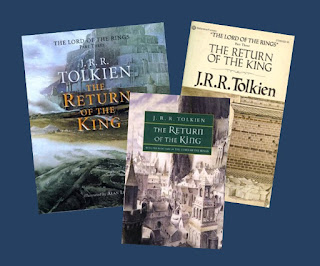 “'Beyond the eyes of the Dwarves are such foretellings,' said Gimli. 'But mighty indeed was Aragorn that day. Lo! all the black fleet was in his hands; and he chose the greatest ship to be his own, and he went up into it. ... and the Shadow Host withdrew to the shore. There they stood silent, hardly to be seen, save for a red gleam.... And Aragorn spoke in a loud voice to the Dead Men, crying: ' "Hear now the words of the Heir of Isildur! Your oath is fulfilled. Go back and trouble not the valleys ever again! Depart and be at rest! " 'And thereupon the King of the Dead stood out before the host and broke his spear and cast it down. Then he bowed low and turned away; and swiftly the whole grey host drew off and vanished....” [A.] [End quote]

For Aragorn to be speaking with spirits that claim to be of “dead” men, or “dead” beings, is diabolic. What Aragorn was doing was almost identical to necromancy. Dictionary.com defines necromancy as: “a method of divination through alleged communication with the dead; black art.” [B.]

The practice of speaking with the “dead” is called necromancy, when seeking wisdom or knowledge by occult means. This is a type of divination. Though Aragorn was not seeking knowledge from the “Dead,” he was speaking with spirits. (To learn more about what these spirits are, click here.) Speaking with spirits of the dead (or familiar spirits) is a pagan and occult concept that J.R.R. Tolkien is promoting in his book. God forbids divination, necromancy, wizardry, and magic in Deuteronomy 18.

“[9] When thou art come into the land which the Lord thy God giveth thee, thou shalt not learn to do after the abominations of those nations. [10] There shall not be found among you any one that maketh his son or his daughter to pass through the fire, or that useth divination, or an observer of times, or an enchanter, or a witch. [11] Or a charmer, or a consulter with familiar spirits, or a wizard, or a necromancer. [12] For all that do these things are an abomination unto the Lord: and because of these abominations the Lord thy God doth drive them out from before thee. [13] Thou shalt be perfect with the Lord thy God.”

The belief that the spirits of dead people hang around the earth is a pagan and occult idea. The Bible says:

“[27] And as it is appointed unto men once to die, but after this the judgment: [28] So Christ was once offered to bear the sins of many; and unto them that look for him shall he appear the second time without sin unto salvation.” [End quote]

The Dead Are in Hell Forever.

In Ezekiel, we see how the dead are in the nether parts of the earth (Hell), fully awake and aware. The Bible says that some in Hell spoke to the Pharaoh of Egypt after he died and was cast into Hell, along with other dead Egyptians.

“[18] Son of man, wail for the multitude of Egypt, and cast them down, even her, and the daughters of the famous nations, unto the nether parts of the earth, with them that go down into the pit.”

“[20] They shall fall in the midst of them that are slain by the sword: she is delivered to the sword: draw her and all her multitudes.”

“[21] The strong among the mighty shall speak to him out of the midst of hell with them that help him: they are gone down, they lie uncircumcised, slain by the sword.” [End quote]

The Rich Man and Lazarus - A True Story

In the Gospel of Luke, when a certain rich man died, he found himself in Hell. There was a hugh chasm that cut Hell off from a place called Abraham’s bosom. A poor man named Lazarus died too, and arrived at Abraham’s bosom. The rich man wanted to Lazarus to return to earth to warn his brothers about the torments of Hell, but Abraham told him: “If they hear not Moses and the prophets, neither will they be persuaded, though one rose from the dead.” 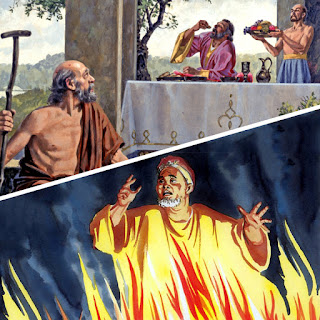 “[19] There was a certain rich man, which was clothed in purple and fine linen, and fared sumptuously every day: 20 And there was a certain beggar named Lazarus, which was laid at his gate, full of sores, 21 And desiring to be fed with the crumbs which fell from the rich man's table: moreover the dogs came and licked his sores. 22 And it came to pass, that the beggar died, and was carried by the angels into Abraham's bosom: the rich man also died, and was buried; 23 And in hell he lift up his eyes, being in torments, and seeth Abraham afar off, and Lazarus in his bosom.

“[24] And he cried and said, Father Abraham, have mercy on me, and send Lazarus, that he may dip the tip of his finger in water, and cool my tongue; for I am tormented in this flame. 25 But Abraham said, Son, remember that thou in thy lifetime receivedst thy good things, and likewise Lazarus evil things: but now he is comforted, and thou art tormented. 26 And beside all this, between us and you there is a great gulf fixed: so that they which would pass from hence to you cannot; neither can they pass to us, that would come from thence.

“[27] Then he said, I pray thee therefore, father, that thou wouldest send him to my father's house: 28 For I have five brethren; that he may testify unto them, lest they also come into this place of torment. 29 Abraham saith unto him, They have Moses and the prophets; let them hear them. 30 And he said, Nay, father Abraham: but if one went unto them from the dead, they will repent. 31 And he said unto him, If they hear not Moses and the prophets, neither will they be persuaded, though one rose from the dead.” [End quote]

This was not a parable because Jesus actually named the poor man as Lazarus. Nor, did Jesus include symbolism in this account as he had in his parables, such as the parable of the vineyard, or the parable of the unforgiving debtor. This was an account of Hell and Abraham’s bosom, a temporary place next to Hell.

Jesus Preached to the Spirits in Prison.

After Jesus Christ’s earthly body died, he went and “preached unto the spirits in prison”.

“[18] For Christ also hath once suffered for sins, the just for the unjust, that he might bring us to God, being put to death in the flesh, but quickened by the Spirit: [19] By which also he went and preached unto the spirits in prison;” [End quote]

We also read in Ephesians 4 that Jesus Christ descended into the lower parts of the earth and led captivity captive.

“[7] But unto every one of us is given grace according to the measure of the gift of Christ.

[8] Wherefore he saith, When he ascended up on high, he led captivity captive, and gave gifts unto men.

[9] (Now that he ascended, what is it but that he also descended first into the lower parts of the earth?

[10] He that descended is the same also that ascended up far above all heavens, that he might fill all things.)” [End quote]

Jesus did not bring people from Hell itself captive. Jesus did not preach to the souls in Hell. Jesus Christ preached to those in Abraham’s bosom, which was not far from Hell (separated by a chasm). Then, Jesus brought believing souls, like Lazarus and Abraham, up into Heaven.

God’s Word (the Bible) is very clear that dead lost souls cannot enter Heaven, and will be in Hell forever. Revelation 21 and 14 say…

“[7] He that overcometh shall inherit all things; and I will be his God, and he shall be my son. [8] But the fearful, and unbelieving, and the abominable, and murderers, and whoremongers, and sorcerers, and idolaters, and all liars, shall have their part in the lake which burneth with fire and brimstone: which is the second death.”

“[11] And the smoke of their torment ascendeth up for ever and ever: and they have no rest day nor night, who worship the beast and his image, and whosoever receiveth the mark of his name.” [End quote]

Nothing that defiles (or is unredeemed) can enter Heaven.

“[27] And there shall in no wise enter into it any thing that defileth, neither whatsoever worketh abomination, or maketh a lie: but they which are written in the Lamb's book of life.” [End quote]

Getting to Know God as Our Best Friend Is the Answer to Our Spiritual Hunger.

In Jeremiah 31:3, God said to both Jeremiah and those who believe: “The Lord hath appeared of old unto me, saying, Yea, I have loved thee with an everlasting love: therefore with lovingkindness have I drawn thee.”