The Occult in Narnia, Part 5 - The Magic Spell Book in Narnia 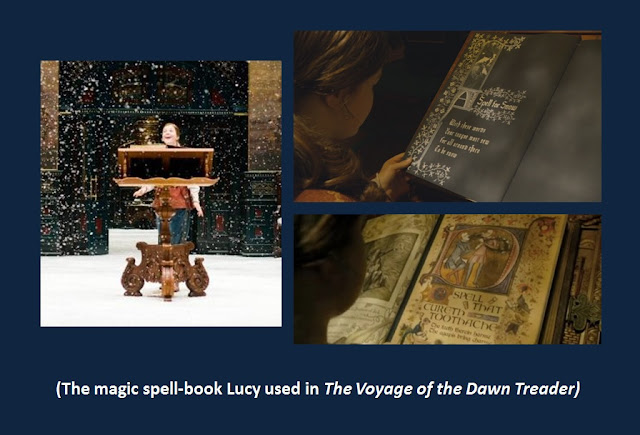 The Occult in Narnia, Part 5 - The Magic Spell Book in Narnia

In this article, we will look at C.S. Lewis' provocative description of magic spells which Lucy used from a magic spell-book, in The Voyage of the Dawn Treader. We will see what the Bible has to say about this subject. And, we will look at something that Aslan himself said to Lucy which will surprise you.

The Number of Times "Magic" and "Spell" Appear in Narnia Books 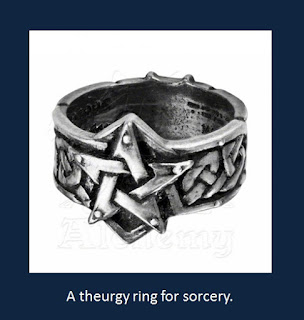 The word "magic" appears throughout the Narnia books, as would make obvious sense, since these books are meant to be about a magical land called Narnia, where Aslan, a lion, can magically fly, and animals can talk. But, the context of the word "magic" in the Narnia books is not used in the way some people might say, "That was a magical date" or "That was a magical outing." It is used to refer to supernatural power that can be controlled by way of magic rings or spells. This is nothing different than witchcraft, which also uses magic rings and magic spells to control something they call "the force." (See the References section at the end.)

Below is a list of the Narnia books with the number of times the word "spell" (in the context of magic) and the word "magic" (including other forms such as magical) appear in the actual novel text of Narnia books:

- THE LION, THE WITCH and THE WARDROBE ("spell" appears 2 times; "magic" appears 23 times)

In total, the word "magic" appears 193 times and "spell" (as in a magic spell) appears 35 times in The Chronicles of Narnia books.

The Magic Spell-Book in Narnia

One example of the word spell is found in this short scene from The Voyage of the Dawn Treader. C.S. Lewis writes:

'"I do not know, Madam," said Reepicheep. "But there is this. When I was in my cradle a wood woman, a Dryad, spoke this verse over me:

"Where sky and water meet,

Where the waves grow sweet,

To find all you seek,

There is the utter East. 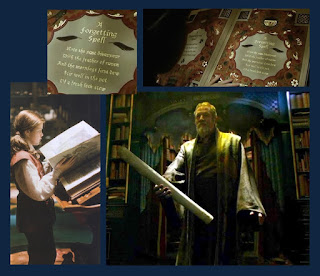 In the same story, there is a chapter titled "The Magician's Book." Lucy, the main character, is in a wizard's house, looking at a magic spell-book. C.S. Lewis writes a vibrant description:

"She went up to the desk and laid her hand on the book; her fingers tingled when she touched it as if it were full of electricity. She tried to open it but couldn't at first; this, however, was only because it was fastened by two leaden clasps, and when she had undone these it opened easily enough. And what a book it was!

It was written, not printed; written in a clear, even hand, with thick downstrokes and thin upstrokes, very large, easier than print, and so beautiful that Lucy stared at it for a whole minute and forgot about reading it. The paper was crisp and smooth and a nice smell came from it; and in the margins, and round the big coloured capital letters at the beginning of each spell, there were pictures.

There was no title page or title; the spells began straight away, and at first there was nothing very important in them. They were cures for warts (by washing your hands in moonlight in a silver basin) and toothache and cramp, and a spell for taking a swarm of bees.

She turned on and found to her surprise a page with no pictures at all; but the first words were A Spell to make hidden things visible. She read it through to make sure of all the hard words and then said it out loud. And she knew at once that it was working because as she spoke the colours came into the capital letters at the top of the page and the pictures began appearing in the margins." [End quote] [1]

Here C.S. Lewis is describing a scene where a little girl (Lucy) is reading from a magic spell-book and causing magical things to start appearing. She even caused Aslan to magically appear, due to the spell she cast to turn invisible things visible. That is concerning, because Aslan is supposed to be a character that represents Christ.

Aslan Said Something Disturbing to Lucy. 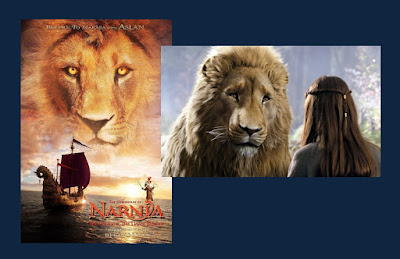 Here is what Aslan told Lucy. It should be very concerning to a Christian. C.S. Lewis writes:

'Then her face lit up till, ... and she ran forward with a little cry of delight and with her arms stretched out. For what stood in the doorway was Aslan himself, the Lion, the highest of all High Kings. And he was solid and real and warm and he let her kiss him and bury herself in his shining mane. And from the low, earthquake-like sound that came from inside him, Lucy even dared to think that he was purring.

"I have been here all the time," said he, "but you have just made me visible."

"Aslan!" said Lucy almost a little reproachfully. "Don't make fun of me. As if anything I could do would make you visible!" 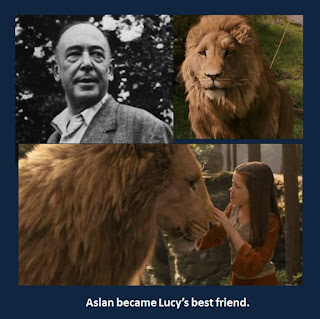 [12] For all that do these things are an abomination unto the LORD: and because of these abominations the LORD thy God doth drive them out from before thee."

Let's keep reading what Aslan says next. (In an earlier article, we learned that C.S. Lewis himself said that Aslan was a "supposal" of Christ or a type of representation of Christ, if Christ were in a fantasy world as a lion [2]). C.S. Lewis writes:

'After a little pause he spoke again.

"Child," he said, "I think you have been eavesdropping."

"You listened to what your two schoolfellows were saying about you."

"Oh that? I never thought that was eavesdropping, Aslan. Wasn't it magic?"

"Spying on people by magic is the same as spying on them in any other way. And you have misjudged your friend. ..."' [End quote] [1]

We need to stop right here and point something out. For Lucy to be "eavesdropping" on other children by way of a magic spell-book is little different than what real witches do today with a practice called "scrying" (a type of divination). Scrying is divining by way of various objects, including crystal balls and scrying mirrors. Divination is defined as: "the practice of attempting to foretell future events or discover hidden knowledge by occult or supernatural means. [3]"

Witches also believe that they can leave their bodies to roam around the earth in something called "astral projection." In reality, witches (and other people) cannot actually leave their physical bodies. What is happening is something that is demonic, which God condemns as divination. Divination simply is gaining knowledge by occult means.

The Devil is the Master of Lies and Deception.

The devil is the master of lies and deception (John 8:44). He can make himself appear as an angel of light to people, even though he truly is a hideous creature. 2 Corinthians 11:14 says: "And no marvel; for Satan himself is transformed into an angel of light." By way of his deception and power, the devil can influence people to see, feel, smell, taste, and hear things that do not actually exist.

In the occult world, witches (and those dabbling in magic) call upon the spirits of "dead relatives" to appear to them. These spirits appear to them in a very convincing facade. In reality, what these people are seeing is clever trickery by way of demonic influence on their minds to get them to see and perceive people that actually are gone and dead.

The Bible calls this necromancy. We know from the Bible that when a person dies, he or she goes to either Heaven or Hell right away. Hebrews 9:27 says:

"And as it is appointed unto men once to die, but after this the judgment:"

God does not treat anyone with partiality, or unfair bias. Romans 2:11 says: "For there is no respect of persons with God." God will allow you to enter His glorious Kingdom and Heaven, if you respond to His call to repent and make Jesus Christ your Savior and Lord. And, most of all, God desires that you enter Heaven. He wants it more than you do.

That is why God sent His Only Begotten Son...

That is why God sent His Only Begotten Son, Jesus Christ, to die on the cross for your (and my) sins. God also greatly desires to have close, intimate fellowship with you in a deep, emotional, spiritual way. God desires to meet your deep, innermost needs for meaning, purpose, love, and joy (1 Corinthians 1:9, John 17:3, Philippians 4:19, Jeremiah 31:3, Malachi 3:17).

Don't go toward what the world has to offer. Receive Jesus Christ today as your personal Savior and Lord. He will then be your Friend, as will God the Father.

Click here to read more about receiving Jesus Christ as your personal Savior and Lord.

David J. Meyer, a former witch, who left witchcraft and became a born-again Christian, wrote some articles exposing the occult in some popular books and films. Meyer explained what magic rings were used for by real witches:

"The first thing a neophyte or beginner witch is taught is that there is a “force.” The “force” has two sides and can be controlled by magic spells, words, potions, incantations, rope magic, rings, amulets, and so on. Witches believe that there is good witchcraft and bad witchcraft, and the good always triumphs over evil! Witches also teach that battles are fought in the Middle Earth and in the astral plane causing upheavals both above and below. Thus, witches emphasize that good must triumph over evil, but it is all witchcraft."

("A Former Witch Looks at The Lord of the Rings." lasttrumpetministries.org.)